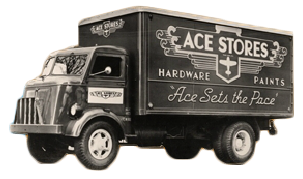 Since 1950 Fullerton Hardware has been helping customers find solutions to their home improvement projects.  Founder, Herman Weishaupt, experienced retail for the first time, as an employee of Sears Roebuck and Co. in 1927.  His interest in hardware began as a child and buying Fullerton Hardware was an opportunity Herman could not pass up.

The original location of Fullerton Hardware was on Spadra Rd. which later became Harbor Blvd.  Fullerton Hardware originally started with limited merchandise. There was only one full-time and one part-time employee.  In order to open up shop, Herman put the family’s grocery money into the cash register.  He built inventory by talking to customers, finding out what they wanted and needed.  In those days, Fullerton was rural and merchandise had to be delivered from Los Angeles.  Herman specialized in next day delivery.  Overnight ground from Los Angeles was less complex in the early 1950s.

Fullerton Hardware expanded in 1964 to 4,000 sq. ft. and in 1978, the store moved to its present location: 117 W. Commonwealth at Harbor Blvd., into what was an abandoned Sears Roebuck and Co. Building.  Today, Fullerton Ace Hardware has more than 16,000 sq. feet which allows for a full range of quality products, from hardware to house wares, in order to better serve the store’s broad customer base.

In 1992, Mike Olson became a partner to Herman.  Prior to embarking on a new career in retail, Mike spent 21 years as a sales representative for California Hardware, a wholesale company, located in the city of Industry. He realized that his knowledge of running and operating a retail store would take some time and was fortunate to have Herman as such a great mentor.  Mike’s motto was “retailers must change with the times, provide legendary customer service and offer an extensive product selection.”

In early 1990 the hardware industry was changing rapidly.  Big Box stores were beginning to emerge and the future of independent hardware stores were in question.  In 2000 Fullerton Hardware joined Ace Hardware, a buying cooperative owned entirely by independent dealers. This strategic alliance allowed Fullerton Hardware to leverage the buying power of almost 6,000 hardware retailers, and remain competitive against the growing “Big Box” trend.

The partnership between Herman and Mike lasted for 11 years until Herman passed away at the age of 95.  Herman’s winning business policy continues to drive Fullerton Hardware: “Serve your customers and know their needs.”

Family owned and operated, Fullerton Ace Hardware continues to be the helpful and convenient neighborhood hardware store.  The store’s staff is knowledgeable and dedicated to outstanding customer service.  Fullerton Ace Hardware’s commitment is to serve the community for many years to come.